To share your memory on the wall of John Carr, sign in using one of the following options:

John was a longtime car salesman and later in his life he became a truck driver. He enjoyed cheering for the Green Bay Packers, as well as watching Star Trek, Western movies, and golf. He was a man who never showed up late, most of the time arriving an hour in advanced. Most of all, he enjoyed spending time with his children and grandchildren.

He was preceded in death by his parents.

The Kloecker Funeral Home and Crematory, Inc. is handling the arrangements. Please send condolences to www.kloeckerfuneralhome.com.

To send flowers to the family or plant a tree in memory of John Carr Jr., please visit our Heartfelt Sympathies Store.

Receive notifications about information and event scheduling for John

There are no events scheduled. You can still show your support by sending flowers directly to the family, or planting a memorial tree in memory of John Carr Jr..
Visit the Heartfelt Sympathies Store

We encourage you to share your most beloved memories of John here, so that the family and other loved ones can always see it. You can upload cherished photographs, or share your favorite stories, and can even comment on those shared by others. 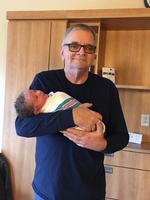