To share your memory on the wall of David Brunner, sign in using one of the following options:

He was born on March 1, 1940, the son of the late Robert and Florence Fuhrer Brunner.

He was born on March 1, 1940, the son of the late Robert and Florence Fuhrer Brunner.

Dave attended Cathedral Prep High School until his graduation in 1958, before enlisting in the United States Army where he retired as a Chief Warrant Officer 4, after serving more than 30 years. He loved his country and was truly proud to be an American. With his strong beliefs you would find him adamantly following the news and often times fearlessly letting anyone around know exactly what he thought.

He had a passion for construction, from remodeling homes to helping with the simplest home repair. Dave could do anything and was a true craftsman. Whatever he was doing, he was a perfectionist and took pride in his workmanship. Dave was a car enthusiast, and loved helping out at his sons’ garage, where he spent a lot of time after his retirement. He enjoyed, cruising around in his Corvette, many years boating on Lake Erie, spending winters in Fort Meyers FL or just having a good time. Dave had a great smile, was an adventurous soul, willing to help anyone who needed him, could be stubborn but always lived life on his terms. He will be sadly missed by his family and friends.

Dave is survived by his first wife Carolyn Corbett and their children; Cheryl Brunner of Erie, David Brunner (Beth) of McKean, Robert Brunner of McKean, Craig Brunner of Erie and Lori Kosienski (Rich) of McKean. His seven grandchildren, Chris, Carissa, Jeff, Jaime, Delaney, Dylan, Kennedy, and two great-granddaughters; Haley and Brooklyn. He is also survived by his Aunt; Virginia Birkmire, many nieces, nephews, cousins and his fur-buddy “Cat”.
In addition to his parents David was preceded in death by his sister and brother in law; Donna and Donald Wheeler, and his second wife, Janet Mazur.

Full military burial will take place on Saturday, June 8, 2019 at 10:30 am at St. Francis Xavier Cemetery in McKean.

To send flowers to the family or plant a tree in memory of David Brunner, please visit our Heartfelt Sympathies Store.

Receive notifications about information and event scheduling for David

We encourage you to share your most beloved memories of David here, so that the family and other loved ones can always see it. You can upload cherished photographs, or share your favorite stories, and can even comment on those shared by others.

Posted Jun 24, 2019 at 02:26pm
I knew Dave for a short period of time when he helped my father pick up a 38 foot cabin cruiser in the Catawba Islands near Cleveland. He became a friend of my father and worked with him to restore the beautiful Egg Harbor boat which was all wood and quite a project. My father taught him a lot about the refinishing at the time and loved Dave because he had a zest for learning and a great work ethic. Even though I only knew him for a few years, I remember him well for his great personality and talent with his hands. He was well liked and a great person. I understand that he went on to have a distinguished career in the military. I just learned of his passing and am sorry I did not know of it in time to pay my personal respects to his family. God bless you Dave, thank you for your service to our great country, God bless you and may you rest in peace. I am happy that I knew you and spent some time with you when I was just a young guy in high school. Tibor Solymosi
Comment Share
Share via: 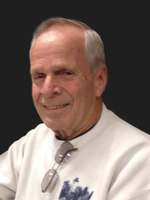