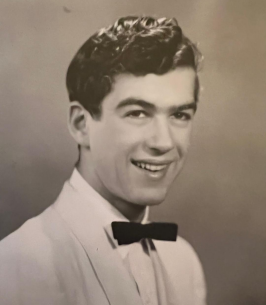 Bob grew up in Erie. He did well in school and worked a paper route, stuck pins in a bowling alley, and worked in the Post Office. Hence, the only sport he had time for was soap box racing. He won the soap box derby in 1948.

He graduated from Cathedral Prep in 1954 and worked on the school newspaper and did photography for the school. In college he majored in Chemistry and earned his Bachelors degree at Gannon University. Bob then joined the Navy reserves, where it was discovered that he had a knack for teaching. So the Navy had him teach radar and other things to fellow officers.

In the late 50’s he was recruited by LAUSD to come and teach science at Westchester High School in Los Angeles California. There he was considered an excellent teacher, and many of his students won awards. While at WHS he became science department chair and the Teacher’s Union Rep. In the late 70’s he received national honor for his teaching and was selected to help correct AP Chemistry Exams in the summers at Princeton University. He was often visited by former students to thank him for the excellent preparation that he gave them for college.

Bob had a great love for animals and contributed to animal organizations. He most always had a pet cat or two and/or a dog or two. He especially loved horses and frequently went to the Hollywood Race Track to bet his favorites. He loved traveling in the US and Europe, taking many trips in the summer time (the advantage of being a teacher). During the school winter break, he always went skiing in Aspen, CO. Bob retired from teaching at age 56, and in retirement he helped people fix up their rental properties, for he was a very skilled carpenter, painter, tile setter, and had many other handyman skills.

In addition to his parents, he was preceded in death by his brother, B. Dale Monahan, and nephew-in-law, Harry B. Ross.

Services are private. Inurnment will take place at Mary Queen of Peace Cemetery. The Kloecker Funeral Home and Crematory, Inc. is handling the arrangements. Send condolences to www.kloeckerfuneralhome.com

In lieu of flowers, donations can be made to Cathedral Preparatory School 225 W Ninth St. Erie, PA 16501.