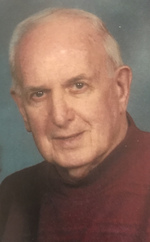 He was born in Pittsburgh, Pa on April 20, 1926, son of the late Henry and Margaret Kowalski Sobieszczyk.

Richard fought in WWII as a United States Marine, serving in the South Pacific as a member of the 2nd Marine Division.  He was also awarded the Purple Heart.  He was an outstanding boxer and football player in his youth, and was an avid billiards player.  He loved reading, crossword puzzles, ballroom dancing, traveling, Presque Isle State Park and spending time with family, especially his grandchildren.  He was a 35 year employee of Greyhound Bus Lines.

He was preceded in death by brothers Henry Jr. and Robert Sobieszczyk and a sister Dolores Talak.

Richard and his family want to personally thank Dr. Michele Tomczak, the Erie VA Medical Center and the staff at UPMC Hamot for the care he received.

Services were private. The Kloecker Funeral Home and Crematory, Inc is in charge of arrangements. Donations can be made to the Erie VA Center or The Wounded Warrior Project.

A Memorial Mass will be held at a later date.