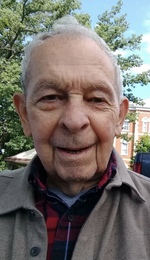 Beloved Husband, Loving Father and Papa
Joseph Anthony Nies, age 92, of Erie, passed away peacefully on Friday, January 31, 2020.  He was born on July 20, 1927 in Erie, Pennsylvania, son of the late John and Anna Humm Nies.
Joseph proudly served in the Army Air Corps European theatre at the conclusion of WWII.  He returned home to work for his father’s construction business, John A. Nies Builders.  Soon after the untimely death of his father, Joe would take over the family business which he would retire from a half century later.  As a business owner he was a proud member of the Builders Association of NW Pennsylvania.
Joe was a devout Catholic, active in Saint John the Baptist parish and later, Saint Patrick Parish.  He was a Knight of Saint Patrick and former member of their renovation committee.
Joe treasured most his wife, children, grandchildren and extended family and friends.  He  enjoyed the time he spent with them, especially at “the country” kicking back with a grin and a beer.  He was a quiet man with a humble spirit and quick sense of humor who shared freely of his time, talent and treasure.  He will be greatly missed by all whose lives he touched.
He was preceded in death by his brothers John A. Nies, Dr. Gerald F. Nies, and Thomas G. Nies, a sister Rita Ann Nies, and infant grandchildren Mary Faith Nies, Therese Frances Nies, Jeffrey William Nies and Anthony Joseph Nies and a brother-in-law, James Weiser.
Joe is survived by his beloved wife of 64 years, Jane Frances Kreidinger Nies; his 13 children, Joseph (Katherine) Nies, Mary Ann (Timothy) Hughes, Colleen (William) Becker, Michael (Geralynn) Nies, David (Karen) Nies, Edward (Kelli) Nies, Christopher (Sybil) Nies, Melani (Donald) Desser, Kathryn (Matthew) Wiza, Ann (Sean) Gates, Elizabeth (Michael) Kuzma, Nicholas (Christina) Nies, and Sarah Nies and spouse Jeffrey Anderson; 36 grandchildren, and four great-grandchildren.  Joe is also survived by a brother, James (Marion) Nies; a sister, Mary Jean Weiser; two sisters-in-law, Jean Nies and Kathleen Nies; and many nieces and nephews.
The family extends their deepest gratitude and sincere appreciation to the Pennsylvania Soldiers & Sailors Home and Hamot Hospice for the compassionate care given to Joe and his family, especially in these last weeks.  Family and friends may call at the Kloecker Funeral Home and Crematory, Inc., 2502 Sassafras Street Erie, PA 16502 on Thursday from 3 pm to 7 pm and are invited to attend the Funeral Mass on Friday at 11 a.m. at St. Luke Church, 421 E. 38th Street. Send condolences to www.kloeckerfuneralhome.com.