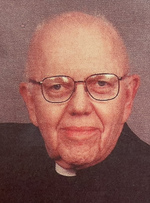 Msgr. Schauerman was born on June 9, 1926 in Erie, Pennsylvania, the son of Henry P. Schauerman and Margaret K. (Stahl) Schauerman. After attending St. John the Baptist Elementary School and Cathedral Preparatory School, both in Erie, he entered St. Charles College Seminary in Catonsville, Maryland. He continued his formation for the priesthood at St. Mary Seminary in Baltimore, Maryland, where he earned a BA in philosophy and a Bachelor Degree in Sacred Theology. He was ordained a priest on May 3, 1951 at St. Peter Cathedral, Erie, by Bishop John Mark Gannon.

In 1963, he was appointed pastor of St. Philip Parish in Crossingville, where he served for the next ten years. He was named pastor of St. Agatha Parish, Meadville, in 1973 and he remained in that position until his retirement in 2001. During that time, he undertook a thorough renovation of St. Agatha Church. He also served as Dean of the Meadville Deanery, and as Administrator of St. Bernadette Parish in Saegertown from 1978-2001. He likewise renovated St. Bernadette Church.

In additional to his other assignments, Msgr. Schauerman was twice elected to the Presbyteral Council (1984-1994) and was appointed a member of the Priest Personnel Board (1984-2001). He also served as Diocesan Director of the Rural Life Conference from 1967 to 1973, as Director of Sodality Unions in various regions of the diocese and on the Diocesan Board of Consultors. In addition to his diocesan appointments, Msgr. Schauerman was a Fourth Degree Knight of Columbus.

Monsignor Schauerman was made a Chaplain to the Holy Father with its title of Monsignor by Pope John Paul II in 1984 and was made a Prelate of Honor in 1994.

Msgr. Schauerman was preceded in death by his parents. He is survived by several cousins.

Visitation will take place on Monday, February 22 at Blessed Sacrament Church, 1626 W. 26th St., Erie, PA 16508, from 9:00am until the time of the Funeral Mass at 11:00am. Bishop Lawrence Persico will preside at the Funeral. All COVID-19 protocols will be followed. The Funeral Mass will be live-streamed and can be followed on the Kloecker Funeral Home and Crematory, Inc Facebook page. Burial will be private at Trinity Cemetery, Erie.