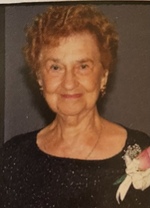 Gertrude Ann Tarkowski, age 94, of Erie, PA died on January 10, 2021. Many thanks to the staff of the LECOM Senior Living Center who made Gert’s last years comfortable and fruitful. All remarked on how she greeted them with her big smile.

Gert was born in Johnsonburg, PA on May 30, 1926, a daughter of the late John R. and Anna Nitsche Kriegisch.

Gert retired from Erie Insurance in 1994 as an Auto Underwriter Three after 30 years of service. She was one of the pioneers of the company. Prior to Erie Insurance, she was employed as a secretary to engineers at General Electric in Erie, PA. Her original job was working the office of the Paper Mill in Johnsonburg, PA.

Gert was an active member of the St. Joseph’s Church since 1968 including being a Eucharistic minister. Besides a great attention to family, Gert’s hobbies were knitting and crocheting, gardening, and traveling.

Gert is preceded in death by her husband Robert Sr., a brother Rudolph Kriegisch of Johnsonburg, PA and sister Lena Scott of Dallas, TX.

Friends may call on Wednesday, January 13, 2021 at the Kloecker Funeral Home and Crematory, Inc. from 4pm - 8pm, and are invited to the funeral mass on Thursday, January 14, 2021 at 10am at St. Joseph’s Church/Bread of Life Community. Send condolences to www.kloeckerfuneralhome.com.

Burial will be at Gate of Heaven Cemetery.

Donations may be made to the Houpt Fund at St. Joseph Church/Bread of Life Community.