To share your memory on the wall of George Cook, sign in using one of the following options:

He was born in Erie, PA on June 22, 1923, son of the late George S. and Helen (Spadacene) Cook.
George was a graduate of St. Joseph Grade School and a 1941 graduate of Academy High School. He served in the Navy, in the Pacific, on an LSM Amphibious Assault Ship as a machinist in charge of the engine room during World War II. He was a machinist, tool and die maker, and purchasing agent throughout his many years at Continental Rubber Works.

He is a founding and longtime member of Our Lady of Peace Church. George was quite an outstanding athlete. He is in the bowling hall of fame for bowling one of his 300 games at the age of 77. Also, he had a hole-in-one in golf at the age of 69. He is a lifetime member of the Siebenbuerger Club, past officer of ATS and member of the Veterans of Foreign Wars, Erie, PA. George loved spending time with his family and friends. He cherished sharing stories about his life and World War II, playing cards and Farkle with his friends at Curry Schell Apartments. He was a devoted fan of the Cleveland Indians and Cleveland Browns, as well as a passionate grocery shopper and enthusiastic handyman.

In addition to his parents and brother, Ronald “Sonny”, he was preceded in death by his wife of 70 years, Mary (Rivas) Cook, brother-in-law, Louie Achille, and his son-in-law, Ronald DiSantis.

The Cook family thanks the VA Community Living Center and the entire VA system for their dedication and outstanding service.

A private Funeral Mass was held at Our Lady of Peace Church. George was buried in Calvary Cemetery with Military Honors. . The Kloecker Funeral Home and Crematory, Inc. is handling the arrangements. Send condolences to www.kloeckerfuneralhome.com

In lieu of flowers, donation may be made to The Fisher House at www.pittsburghfisherhouse.org
Read Less

To send flowers to the family or plant a tree in memory of George Cook, please visit our Heartfelt Sympathies Store.

Receive notifications about information and event scheduling for George

There are no events scheduled. You can still show your support by sending flowers directly to the family, or planting a memorial tree in memory of George Cook.
Visit the Heartfelt Sympathies Store

We encourage you to share your most beloved memories of George here, so that the family and other loved ones can always see it. You can upload cherished photographs, or share your favorite stories, and can even comment on those shared by others. 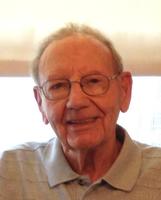