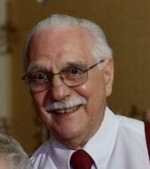 He was born in Fairview, PA on October 12, 1936 a son of the late Michael and Helen Roskoski Lepkowski.

Ed was an Airforce Veteran, a chemist at Lord Corporation for 30 years, and a previous owner and baker at a Mister Donut in Charlotte N.C.  He had been a proud fourth degree Knight with council 278,  a member of the American Legion post 773,  and was a devoted Catholic.  Ed loved baseball!  He played catcher and first baseman for years.  He was a ‘damn’ good first baseman according to his wife Lorraine, but couldn’t ice skate worth a damn!  He loved taking home movies and the family has days worth of VHS footage.  He also enjoyed bowling,  and was emphatically and outwardly proud of his grandchildren.  Being an avid hunter he was preceded in death by his adored pets Barney Beagle, Moses the cat, Katie Doberman and the loving Henry Beagle.  He is survived by Bailey Beagle.  His Grandchilden’s fondest memories by far are long rides on Pop Pop’s tractor during the warm summer days.

He is preceded in death by a brother, Joseph Lepkowski.

He is survived by his loving and devoted wife of  51 years, Lorraine M. Lutz Lepkowski, a daughter, Cynthia Johnson of Erie, a son, Gary Wisniewski of Melbourne, Australia, four grandchildren, Adam, Jennifer and Emily Johnson and Ryan Gilden, two sisters, Carol Hansen of Arizona and Stella Perkins of Harborcreek, a brother, Michael Lepkowski (Joann) of Arizona and son-in-law, Daniel Johnson.

Friends may call on Monday, December 21st from  3 p.m. - 7 p.m.  with Rosary being recited at 2:30 p.m.  at the Kloecker Funeral Home and Crematory, Inc. and are invited to the Funeral Mass on Tuesday December 22nd  at 11:00 a.m. at Blessed Sacrament Church.  Send condolences to www.kloeckerfuneralhome.com

Please buy a toy for a tot to donate in his memory.