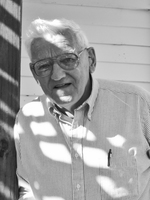 Don was raised on a farm in Maine and later ran his own dairy farm for ten years. Don served in the Navy during WWII and the Korean Conflict as an Aviation Machinist Mate.He was a Union carpenter for thirty seven years until his retirement at age sixty-five. Don was a sixty year member of the Tyrian Commonwealth Lodge No. 362 F&AM. After retirement, he continued his woodworking for family and friends. Don was an avid stamp and coin collector. Most of all, he loved spending time with his family, especially his grandchildren and great-grandchildren.

Besides his parents, Don is preceded in death by his first wife, Maxine (Shirley) Barton, his step-son, Gordon May, brothers, Gordon Barton and Charles Barton, and his sister, Ellen Snider

Friends are invited to the Kloecker Funeral Home and Crematory, Inc. 2502 Sassafras Street Erie, PA 16502 on Sunday from 2 pm until the time of the service at 5 pm. Burial will be private at Erie County Memorial Gardens. Send condolences to www.kloeckerfuneralhome.com

In lieu of flowers, donations can be made to Wesbury Benevolent Fund, 31 N. Park Ave. Meadville, PA 16335