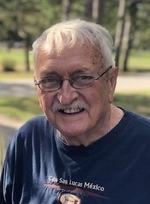 Born on August 23, 1940, the son of the late James and Eleanor Evans, Chuck is survived by his son, Ethan of Sacramento, CA, his two loving grandchildren, Jonathan and Sam, his sister, Ginny McIver of Englewood, FL, and his cousins, Penny and Steve Porter of Erie. Many cousins, nieces, nephews, and friends also survive.

He is preceded in death by his wife of 55 years, Susan (Magenau), his eldest son, Eric, and siblings Doris and Bobbie.

Chuck loved Erie – the lake, the peninsula, the Greek Festival, and the local hockey teams going all the way back to the Blades at the Field House through the Otters of today. He gave of his time and talents through work with various organizations throughout his life in Erie—West Lake Fire Department, Erie Hotline, Volunteers in Probation, Shriners Hospital, and the Erie City Mission to name a few. He served his country in the U.S. Navy through active duty and reserve from 1959-1965 and later volunteered as a member of the Coast Guard Auxiliary. He spent countless Saturdays and literally thousands of hours with the men and women of Coast Guard Station Erie, covering watch and answering calls for help. At the Coast Guard and throughout the community, Chuck served formally and informally as mentor and trusted friend to many people. As one man recently reflected, “He was a beacon of hope who helped me out of the mess I was in as a kid.” In all of this, Chuck would humbly remark, “I simply go where I am sent.” A graduate of Providence Country Day School and Nichols College in Massachusetts, he was a trained accountant, but took an early risk, going into computers, initially at Baldwin Brothers and then retiring from a long career at the Erie Daily Times as Director of Data Processing. Chuck spoke French fluently, which came in handy on a week-long bicycle trip in France. He also spoke a little Spanish and a few words of at least 6 other languages. He is well-known for his many stories, jokes, and even a few dirty limericks. Chuck has been to countless concerts from Iron Maiden (as the only dad willing to chaperone his son Eric and his friends) to the Erie Philharmonic and the Grateful Dead with his wife. He loved to travel and especially drive. He and Sue visited all fifty states and all Canadian provinces and territories; He cruised through the Panama Canal, and visited Mexico, the Caribbean, and over a dozen European and Mediterranean countries.

Friends may call on Sunday, January 16th at the Kloecker Funeral Home and Crematory, Inc. 2502 Sassafras St. Erie, PA 16502 from 9a.m. until 12:30p.m. and are invited to the Funeral Service on Sunday at St. John's Evangelical Lutheran Church, 2216 Peach St. at 1p.m. Send condolences to www.kloeckerfuneralhome.com. Burial will be private. The family is requesting that all visitors please wear a mask.