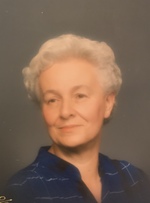 Catherine Sakulich Ott, 92, of Waterford, PA, passed peacefully on Monday, September 9th, surrounded by her loving family. Catherine was born in Dunmore, PA, on November 21, 1926, to Nicholas and Anna Huzinec Sakulich. She moved to McKean, PA, where she met and married the love of her life, Edwin Ott. They later moved to Erie to raise their family and were happily married for 46 years. She now rejoins Edwin in the company of the Lord.

Catherine was an active member of St Joseph Parish where she volunteered at the school and later served as a Eucharistic Minister. She was a graduate of Erie Commercial College and was employed at Erie Insurance.

Catherine enjoyed gardening and cheering for her children and grandchildren at sporting events. Later in life, she enjoyed playing euchre, pinochle, and “trains” with her family. Even if she could not win the game, she still worked hard to win the “baby game.” “Gramma” had an encyclopedic knowledge of the extended family. She was an avid reader and loved to complete the Cryptoquip and Jumble in the Erie Times News.

Catherine was preceded in death by her beloved Edwin and her sister Margaret Walker (George). She is survived by her sister Anne Conroe (Robert) of Erie and by her five children, Mary Madia (Robert), Anne McConnell (Terry), John Ott (Jennifer), Kathleen Hansen (John), all of Erie, and Jean Kanyo (Zoltan) of North Haven, Connecticut. Her legacy also includes seventeen grandchildren and four great grandchildren.

Friends may call on Friday at St. Francis Xavier Church, McKean from 4 pm until 8 pm and are invited to the Funeral Mass there on Saturday at 10 am. Send condolences to www.kloeckerfuneralhome.com
Burial will be in Laurel Hill Cemetery.

Catherine was a true matriarch. She will be dearly missed but never forgotten.

In lieu of flowers, donations may be made to Catholic Relief Services for aide to recent hurricane victims.