To share your memory on the wall of Bernard Graf, sign in using one of the following options:

Bernard R. Graf, age 79, died peacefully on August 8, 2019 at St. Mary’s Home of Erie, East in the presence of his sister Mary Ann and his cousin Judy.
Bernard was born on January 24, 1940 in Erie, Pennsylvania, the eldest son of the late Bernard and Lavina Graf. Bernard was the beloved brother of Mary Ann (Graf) Ehrman (James) of Catonsville, Maryland and Reverend Paul M. Graf of Lafayette, Indiana. He was the treasured uncle of Gregory Ehrman of Catonsville, Maryland; Charles Ehrman (Liz) of Catonsville, Maryland; Daniel Ehrman (Tammy) of Eldersburg, Maryland; Reverend Terrence Ehrman, CSC of the University of Notre Dame; and Kristan Endler (Erik) of Marriottsville, Maryland. He was the endearing great uncle of Clara, Patrick and Adele Ehrman of Catonsville, Maryland; Lexi and Marissa Ehrman of Eldersburg, Maryland; and Kelly and Andrew Endler of Marriottsville, Maryland.
Bernard was a graduate of Sacred Heart Grade School and Cathedral Preparatory School, Class of 1958. In 1962, he graduated from Gannon University with a Bachelor of Science Degree in Mathematics and in 1964 from the University of Detroit with a Masters Degree in Economics. Upon graduation, after completing the ROTC Program at Gannon University, he was commissioned a Captain in the United States Army. His military service included two years in Vincenza, Italy and one year in Stuttgart, Germany. Bernard was employed for many years by the Erie Coca-Cola Bottling Works.
Bernard was a noble, honorable and moral man of God. He prayed the rosary daily and was deeply committed to his Roman Catholic Faith. He loved our Lord, Jesus Christ, and His Mother Mary.
Bernard was a most loving, gentle and kind person. He had cared for his 100 year old mother with great tenderness and compassion. His family and revered friends were recipients of many acts of kindness, hospitality and aid coming from the goodness of his generous heart.
Bernard was blessed with a God-gifted intellect and a phenomenal memory. He was a scholar pursuing Latin, Greek and mathematics; a connoisseur of the Fine Arts, especially the music of the great composers; a linguist, a conversant of German and Italian. He sought after truth and beauty.
Bernard was a steadfast alumnus and supporter of Cathedral Preparatory School. For many years, the highlight and delight of his life was following the sports programs of the Cathedral Prep and Villa Maria athletes. He attended every sporting event of every season of every team. He was their number one supporter, cheer leader and fan.
Friends may call at the Kloecker Funeral Home and Crematory, Inc 2502 Sassafras St. Erie, Pa 16502 on Thursday, August 15 and Friday, August 16 from 3 pm to 7 pm and are invited to the Funeral Mass on Saturday, August 17 at 10 am at St. Luke Church. Send condolences to www.kloeckerfuneralhome.com
Entombment will be in Gate of Heaven Mausoleum.
Memorials may be made and checks payable to the “Monsignor Goodill St. Luke School Education Fund,” c/o St. Luke’s Church, 421 East 38th Street, Erie, PA 16504 or to “Prep and Villa Athletics,” c/o Cathedral Preparatory School, 225 West 9th Street, Erie, PA 16501.
Read Less

To plant a memorial tree in honor of Bernard Graf, please visit our Heartfelt Sympathies Store.

Provide comfort for the family by sending flowers

We encourage you to share your most beloved memories of Bernard here, so that the family and other loved ones can always see it. You can upload cherished photographs, or share your favorite stories, and can even comment on those shared by others.

Posted Aug 13, 2019 at 11:50am
A gentle and kind man has left us
It’s not the length of his life
but the quality of the life lived.
Dr. Tom Warneka
Comment Share
Share via:
JE

Posted Aug 12, 2019 at 07:57pm
Rest in peace Bernie. Bernie was a good friend to my wife Heidi and me. We communicated over the years and his visits to our home in Pittsburgh. He always called me Joseph. Every year he sent us birthday cards in German to Heidi and in Latin to me. We know you are already in heaven.

I’m proud to have been Bernie’s locker-mate during our Cathedral Prep days. He was a true gentleman.
NS

Posted Aug 10, 2019 at 12:51pm
Will miss seeing him at every funeral I went to..he was so faithful..RIP...hope all those people came to greet him
Comment Share
Share via: 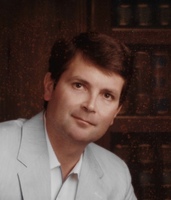