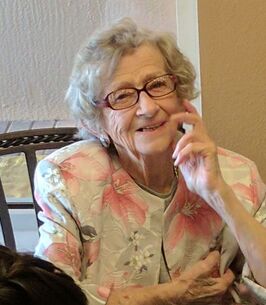 She was born in Clarion, Pa on January 24, 1921, a daughter of the late Edward and Emma Ruffner Cyphert.

She worked for many years for Bell, GTE and Verizon, retiring in 1982 after 40 years. She was a member of Blessed Sacrament Church, the Verizon Telecom Pioneers-Fort Pitt Chapter and SAGE. She enjoyed bocce, bowling, sewing and traveling. She was also a life member of the Presque Isle Pioneers.

She is preceded in death by her husband John Lynch, Jr, four sisters, Angeline, Rita and Jane Cyphert and Maybel Vereb and two brothers, John and Edward Cyphert.

Friends may call on Monday, June 13th, at the Kloecker Funeral Home and Crematory, Inc from 9 am until the time of the service at 10:15 am followed by a Funeral Mass at Blessed Sacrament church at 11 am. Send condolences to www.kloeckerfuneralhome.com

Burial will be in Calvary Cemetery.

Memorials may be made to the Msgr. Connelly Endowment Fund at Blessed Sacrament.